THE GALLERY OF THE THIEVES: RECTO / VERSO 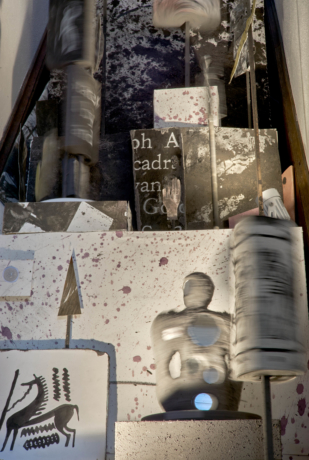 THE GALLERY OF THE THIEVES: RECTO / VERSO

Tri-Star Arts is also pleased to announce a new exhibition in their Golden Chain Gallery project space located at the historic Candoro Marble Building. The Gallery of the Thieves: Recto / Verso, a new installation by Andrew Scott Ross of Johnson City, Tennessee opens Friday, February 18, 2022 and will run through Saturday, April 23, 2022. This site-specific exhibition has been installed within the unusual architectural space of a steep wooden stairwell. Public receptions will be held on Friday, February 18, 2022 from 5:00- 8:00 pm (artist in attendance) and Friday, April 1, 2022 from 5:00- 8:00 pm.

The Gallery of the Thieves: Recto / Verso attempts to challenge the Eurocentric narrative of classical antiquity through the reconsideration of the historical display. To do so, Ross presents a small non-static arrangement of images and objects from the distant past. This display in motion has objects that are often two-sided - including two versions of history, with the recto often challenging the verso. Many of these forms show imagery from Greek and Roman antiquity, which rotate into images from the Indus Valley (today's Pakistan), Mesopotamia, and the broader Levant - who, through ideas, imagery, or material process, shaped the cultural landscape of antiquity. Some objects play with flatness, blurring sculptural form and drawing; others are static and act as a backdrop for oscillating pieces. The Gallery of the Thieves: Recto / Verso is Ross's reflection on his unsettled positions regarding historical accounts and how we exhibit them.

The multi-disciplinary studio practice of Andrew Scott Ross focuses on finding alternative methods of interpreting, recording, and visualizing the ancient past. To act out his research, he has created works in a range of mediums that attempt to isolate the common socio- and psycho-cultural constructions often embedded within historical display. Ross has exhibited throughout the United States and abroad including; the Museum of Arts and Design in New York, the Building for Contemporary Art in Geneva, Switzerland, the Museum of Contemporary Art of Georgia, the Guggenheim Museum’s Peter Lewis Theater, the Ben Gurion Airport in Tel Aviv, Israel, the Knoxville Museum of Art, the Hunter Museum of American Art, the Weatherspoon Museum and the John Michael Kohler Arts Center. His work has been reviewed in publications such as Artforum Magazine, Art in America, The New York Times, The New Yorker, Sculpture Magazine, and Artsy. He has won awards from institutions such as the Joan Mitchell Foundation, SouthArts, and the Center of Excellence for the Creative Arts. His work Dry Erase was displayed in the 2016 Atlanta Biennial and his recent work Gallery of the Thieves was included in Appalachia Now! An Interdisciplinary Survey of Contemporary Art in the newly renovated Asheville Museum of Art. Ross is an Associate Professor at East Tennessee State University where he teaches drawing and foundations studies. Ross received his BFA from the Atlanta College of Art and his MFA at the School of the Art Institute of Chicago. He subsequently studied at the Skowhegan School of Painting and Sculpture.

This exhibition is open to the public regularly from Tuesday through Saturday, 11:00 am until 5:00 pm, alongside iconic spaces within the Candoro Marble Building (located in the Vestal neighborhood of Knoxville). The use of masks and social distancing is encouraged.

Tri-Star Arts is based at the Candoro Marble Building with its main office, gallery space, and artist studios. Their gallery features exhibitions with a local, state-wide, and national focus on contemporary visual art.

Constructed in 1923, the Candoro Marble Building originally served as the offices and showroom for the Candoro Marble Company. It showcases a Charles Barber-designed Beaux-Arts architectural style, beautiful Tennessee pink marble, and an iconic tree-lined drive on its one-acre grounds. In early 2021, the Aslan Foundation completed a substantial restoration of the building. In partnership with the Aslan Foundation, Tri-Star Arts oversees programming at the site. It is located at 4450 Candora Avenue, Knoxville, TN 37920.

Tri-Star Arts serves Tennessee by cultivating and spotlighting the contemporary visual art scenes in each region while fostering a unified state-wide art scene. Tri-Star Arts programs promote art dialogue between the different cities in the state, and between the state and the nation.